Blizzard that may have come our way skirted round us, but left a calling card of an inch or so of snow- more than last week, but a low enough coating that the grass and vegetation pokes through all around.

Lots of deer and fox footprints- the fox prints at one point started having a dragging trail behind the feet- a tail? dragging something in its mouth? an injured paw dragging behind? we weren’t sure how to read the writing…

Today I am accompanied by a 32 pound almost 3 year old on my back (I did start this also to get more exercise, didn’t I?) and an exuberant 5 year old darting around beside me.  Their chatter fills my brain as does the creeping anxiety of feeling time run out for the mundane to come shortly- piano tuner appointment, school bus (on a two hour delay), packing lunches for the day.  As a result, I didn’t notice many nature sounds around me.

But, I happened to catch these curly-cues of calligraphy poking out of the snow. Makes me think that this writing is what we see when the snow carpet covers the bulk of their bodies- that the uncovering of the beauty is a covering – unlike painting or music where the uncovering is making a brush stroke on bare canvas, or striking a note in silence.

But- what if the uncovering WAS a covering in art and music?  I’m guessing Andrew Wyeth did know this- in so many of his paintings the bright whites are the bare paper or canvas that he has uncovered by covering the rest of the space.  He ordered special especially bright white paper from Italy for this purpose- you can see magnificently large rolls of it when touring his studio in Chadds Ford.

We carry on our way, and my exuberant son with a pair of double-fisted sticks starts trailing them on the ground- leaving a path like that of the fox.  Then he stops and says “Mommy, I’m going to draw a deer footprint..” and begins his own calligraphy. 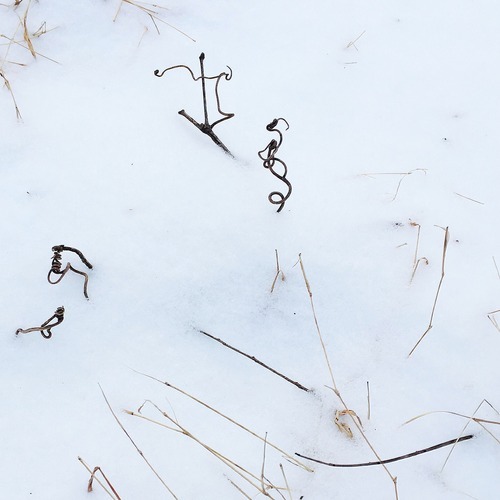